Australia says no to Carbon Scam 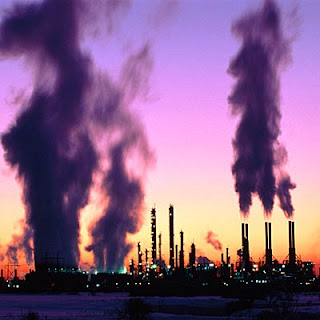 Australia leads the way in many things, such as footballs, meat pies, kangaroos and Holden cars, to name a few. Now there is something to really sing about. Although Kevin Rudd doesn't realise it, he is now leading the revolt against the global warming carbon credit scheme that is a trojan horse for a global taxation system for the new world order government. The ETS is being delayed until 2012 and will be totally discredited and will have no public support by then.

After the embarrassment of the Copenhagen debacle, the federal government has realised that the enlightened Australian electorate smell a rat. Look at the phenomenal attendances at Lord Monckton's lectures earlier this year. Australians have never had a reputation for being a soft touch for scammers.

This effect has flowed through to the proposed 64% energy price rises that were being incrementally rolled out by 2012. This price hike is now being reassessed and reduced because it was getting its moral authority from the ETS (emissions trading scheme).

What does an Icelandic volcano have to do with 9/11? Both events have caused significant grounding of air traffic across the globe. Both events have produced spectacular coverage in the media.

When we look at volcanic eruptions we are seeing pyroclastic clouds. These are the huge clouds of smoke and dust that billows and spews out in massive volume from the caldera. Due to the heat from the volcano the cloud is being inflated by all this thermal energy.

When the towers came down on 9/11 we all saw the huge billowing smoke and dust clouds that were produced as the structures collapsed. The clouds spread throughout New York for kilometres.

The clouds could be described as being pyroclastic in character. They look volcanic. This, of course, begs the question, what is creating the heat necessary to produce these clouds? The answer is explosives. Yes, the buildings were on fire, but these fires were limited to the top of the buildings. As the towers fall you can see the clouds being generated as the buildings rip themselves apart from the top down. If you look carefully you can see the lateral ejection of smoke and dust preceeding the collapsing structure.

In itself, this is not conclusive proof of decontrolled molition. However, when viewed in association with the physics, forensic and circumstantial evidence it forms part of a compelling case.

War always kills civilians. It used to be called "collateral damage". It should now be described as "sport". The recent release of the Bagdad massacre video by wikileaks.com has brought to us armchair spectators a new reality of war. The images of innocent people being annihilated are sickening. Even worse is the video showing a van arriving to rescue the wounded which is targetted as well. There were children in the van who were wounded. Amongst the dead was a Reuters journalist.

This is not just the horror of war here. There is something more. There is an impatience for blood. Listen to the desire to shoot. The shooter can't wait for the order to shoot, thus absolving him from any responsibility, yet deriving the pleasure of the hunt. "Nice","Good shoot'n!". And I always thought that you don't shoot medics. When has an ambulance ever been a legitimate target?

In the following video we have US troops having a fun time shooting at men and women and then laughing about it as the smoke clears from the muzzles of their machine guns. It's sport. They might as well be shooting roos from a ute whilst downing tinnies.

This next video is less violent but is probably more disturbing. British troops are beating up Iraqi boys. As the boys plead for mercy, the cameraman is feeding off the pain and fear and is getting off on it. It is truly demonic in nature.

Any US claim to the moral high ground in this war was lost when WMD's were not found in Iraq. With each additional attrocity, the US and British forces & their governments sink lower and lower in the eyes of the world. The comparisons with Nazis is already being made. And before you sit back and change the channel, realise one thing. These hardened troops will be returning home soon and they will be taking up jobs in enforcement, military and police.
Posted by sword of truth at 11:11 PM 4 comments: 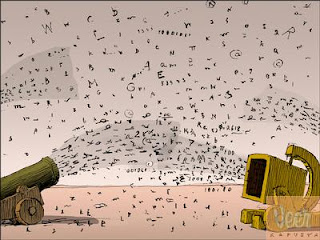 In the last days there will be wars and rumors of wars....

There are wars being fought in many places around the globe at present, Afghanistan and Iraq to name two. However, it's hardly a global war like WWII. The “war on terror” is giving the US an excuse to bully countries that are too small to fight back, but again this is a fake war on a phantom enemy. However, there is a real war that is being waged right now. That's the information war.

Tyrants worked out long ago that it's a lot less messy to win people's minds rather than their land. Hitler turned this into an art form with the help of his propaganda minister Goebbels (Goebbels' Principals of Propaganda). Not only is it cleaner, but propaganda is cheaper than bombs and guns, is more pervasive and comprehensive in its coverage and offers a great bang for the buck. Whether it's the dropping of leaflets, the broadcasting of state radio or mainstream TV, mind control is the goal. This may be as simple as selling a particular brand of soap suds or as sinister as political control of mainstream news broadcasts to manipulate our interpretation of reality.

It's not just advertisers and politicians who want your mind, religions want your mind too, whether it be Jesuit indoctrination of the child or the radicalisation of the fundamentalist Islamic terrorist. For many of us, we allow ourselves to be influenced by more than one source and we try to put it all together into some kind of mental construct of the world we view around us. We read our Bibles, then turn on CNN to catch the news.

As technology advances, new tools like the internet and mobile communications are opening up more and more new avenues by which we can connect minds around the globe. This is a two edge sword. We have access to the thoughts and opinions of a global network of people banging away at keyboards. The information revolution has been instrumental in destabilising repressive regimes as dissidents are able to blog their news reports of repression to the free world, poking holes in the fabric of the propaganda shields. Countries such as China understand fully the danger that a free internet poses to their totalitarian control, hence the heavy state censorship of their internet. Moves are afoot now to clip down the western internet to a more concise offering of commercial websites that will make the net look more like a selection of pay TV channels (Internet 2). The genie is out of the bottle and the mainstream media want us back in their control.

So here is the battle. The internet has brought uncontrolled information to the fingertips of the people. There is a sharing of ideas, news reports, discussion, pics and videos that is cutting through the mind formers agenda that is creating an awakening across the globe. We have seen this happen in Iceland and Greece, where the citizens have protested against the raping of their countries by the international banksters and sparked grassroots demands for freedom and democracy. For this reason, web sites like youtube.com are invaluable.

When they do want us to move in a certain direction, they will use fear as the goad. The swine flu scare and global warming are two recent examples. They want you to buy vaccines and carbon credits. A large band of medical and climate experts that were being silenced on the mainstream media have found a soap box on the internet. Through simple videos and web site posts they have been able to present the other side of the case to an audience that hungers for the truth.

In this modern information war the truth is the enemy and our minds are the theatre for the conflict. As a truth seeker, you shall be labelled as a sympathiser of the enemy. As a proponent of the truth, you shall be identified as an enemy combatant. The weapons for our fight are the simple truth, distributed in video links, DVDs, forum discussion and speaking with your family and friends.

The truth is powerful. In the presence of truth, lies cannot stand. The age old battle for truth has been waged since the Garden of Eden and the fight ultimately exists between God and Satan. Those on the side of truth are rising. The world is awakening from a deep sleep of falsehood and a new day of clarity is dawning. If you are a Christian, you should be on the front line. Noone else should desire and seek the truth more than the followers of Jesus, for he claimed to be “The Truth” itself.

It is clear that if you do not actively seek the truth, you will without doubt remain living within a construct of lies and deception created for you by the mind moulders. Your Christian faith does not lift you out of the false front western town that we were born into. It is up to you to walk through a doorway and see for yourself that it's all propped up with sticks.
Posted by sword of truth at 11:56 PM 6 comments: