"The eastern world it is explodin',
violence flarin', bullets loadin'………
but you tell me over and over and over again my friend,
ah, you don't believe we're on the eve of destruction"

The unrest of the people is spreading like wildfire throughout the middle east. It’s not easy making sense of this from here. The revolt is being fueled by hunger, artificial poverty and totalitarianism to name a few. But the message is, above all, “we’re as mad as hell, and we’re just not gonna take this anymore!!!” Some commentators claim the crowds are “rent-a-crowds” but paid stooges don’t take bullets.

Whether or not the fire is being stoked by foreign interests is not clear, but rest assured, the new world order interests will take advantage of any power vacuum and position their agents of influence while they can.

Libya is a the 12th largest oil exporter. Europe is their biggest customer. Italy buys a third of their supplies from Libya and price per barrel has already risen sharply in response.


Lindsey Williams has just done this interview with Alex Jones. His elitist contacts tell Williams that this is all engineered to double cross the middle east oil suppliers by collapsing the US dollar and leaving them holding valueless T bills. This will send them back to a pre-oil bedouin lifestyle. The arabs will be upset to say the least and will stop selling to the US. The US will then open their vast Alaskan oil reserves that they have kept under their belts for decades, but only when to price gets to $200/barrel. Although I disagree with the Williams dismissal of peak oil, his predictions about oil price movements has been accurate so far. China has stitched up a deal with Russia to supply their oil needs so they can stay clear of the trouble.

This is hot off the press. Listen for yourself. 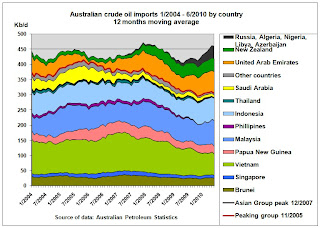 From this graph we can see that Australia imports only a small percentage of our oil from Libya, and about one quarter of our total imports come from the middle east, the majority of our supplies come from South East Asia. We will see price increases at the Aussie pump but hopefully won't be as bad as what Europe will experience.
Posted by sword of truth at 1:43 PM 4 comments:

Could cyclone Yasi have been stopped? 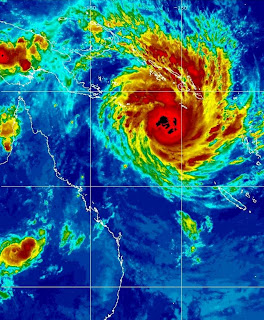 Anyone would think, what has Queensland done wrong to deserve the destructive weather that they have experienced over the last month? Does God have something against our beloved banana benders? Early in the new year we saw unprecedented rainfall cause flash flooding though Brisbane and the hinterlands. This caused extensive damage not just to residential property but also has put the major mining and agricultural industries into chaos.
Then last night we witnessed Cyclone Yasi hit the north eastern Queensland coast. It was rated as a category 5 cyclone with wind speeds up to 300kph. That’s as bad as it gets in meteorological terms and will go down as the worst cyclone to hit Australia on record.

Could it have been stopped?

Ben Livingstone worked in the US Navy during the 1960’s developing weather modification technology for warfare and peaceful purposes. These were highly classified secret projects. The techniques generally involve cloud seeding to vary the amount of rainfall and energy generation from storm clouds. The following video interview with Livingstone demonstrates that the ability to control weather outcomes exists and has been practiced on civilian populations. There is no doubt in Livingstone’s mind that hurricanes and cyclones can be modified to reduce their destructive power. View Ben Livingstone interview.

If this technology is available and various governments use it for their own purposes, the question must be asked, could the Australian government have done anything to prevent/minimize cyclone Yasi and the floods and if so, why didn’t they?

How about this…what if these recent events were the result of mal intent? No one would suggest that our government would wage weather warfare on its own people. However, what if agents were working on a global scale to destroy the economies of nation states by ruining their their productive capacity? Is this beyond the realms of possibility? We are currently witnessing the financial destruction of the US, Ireland, Greece and many other western countries. Many believe this is being orchestrated to bring these countries to heel under one world government. Wouldn't weather warfare be the least suspected and most deniable strategy when the financial strategies fail? Just blame global warming and climate change.

It has to be noted that Australia, compared to the rest of the world, has to a large degree avoided the worst of the global financial crisis due to our healthy commodity based economy (compared with BS based US economy). Yasi has all but destroyed our banana crop for the season and has thrown Queensland tourism into chaos. The floods have put Queensland coal exports on hold for many months. This will cost Australia big bucks.

As the floods inundated Brisbane a few weeks ago, similar floods were being experienced in the Phillipines, South Africa & Rio de Janeiro. Whilst Yasi was in full swing, the US were experiencing one of the largest snow storms ever which covered most of the country and affecting 100million people. The weather seems to be going crazy. And who knows how much of the chronic drought and crop failures in Africa isn't the result of weather weapons to keep that continent impoverished and under control?