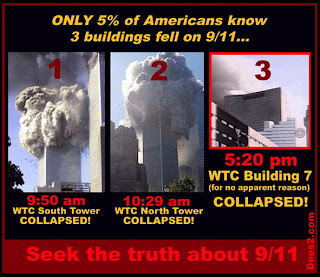 We have all seen the horrific images and video of 911. For weeks after the attack, it was the only show on TV. We watched the two towers implode into a pyroclastic cloud of deadly dust over and over again. It has imprinted the global psyche like no other single event.

So how many of you are aware of Building 7? WTC 7? What was that?

It was about 47 storeys tall, so it was big by Sydney standards. WTC 7 was not hit by plane. Small fires, supposedly caused by falling debris from the towers, burned randomly through the structure for 7 hours. It then suddenly collapsed symmetrically and neatly into its its footprint at 5:30pm. This is totally inexplicable. I am an architect and I know enough about building failures to know that burning buildings just don't behave like this. Watch this video:

What does it look like then? Yes, it looks just like a highly controlled demolition. Huh?! How could that be? That would mean that there was planning and preparation. By whom?

There is much conjecture about the offIcial 911 story. Were the towers demolished as well? Did an airliner really hit the Pentagon or a missile instead? Were the airforce incompetant or incapacitated in failing to get just one intercepter into the air in time? But with regard to WTC7, there is no explanation. It gets hidden. The Official 911 report gave it one paragraph at the back of the document. You have never seen the footage of WTC 7 because it was never allowed to be broadcast. You can see why now.

Other WTC 7 anomalies:
Ask yourself this, if I was playing Jenga, what would I have to do to make the blocks fall like WTC 7?

I leave you now to consider the consequences of all this.

Welcome to my world.
Posted by sword of truth at 1:10 PM